(This is a short sample section of an e-book published by Book Boon – The world’s largest e-publishers). The full book is available either via the 30-day free trial or paid premium service at https://bookboon.com/en/the-coachs-guide-to-the-drama-triangle-ebook

The History of the Drama Triangle

The Drama Triangle is a model of dysfunctional social interaction, created by psychotherapist Stephen Karpman in 1968. Karpman was a student of Eric Berne (who developed Transactional Analysis). Transactional Analysis (TA) was already well established in the 1950s by Berne as a response and development of family therapy which had sprung up after World War Two. He felt there was a lot to be learned by observing the interactions between people as opposed to directly asking people questions in therapy, as had been championed by Sigmund Freud. Berne talked about these interactions being a “game” involving social interactions or transactions between people, with those involved switching roles frequently during the interaction itself.

Karpman was interested in sports, namely American Football, and at this time was starting to look at the connection with TA. He was especially struck by sports coaches using diagrams to explain tactics which invariably had triangles in their midst. The importance of triangles was not new within psychotherapy but Karpman came to see that the three-point triangle was significant. Two people left alone often have difficulty resolving conflict and will seek to include a third person to reduce tension. In therapy, this can often be the therapist, and in coaching it can be a coach, facilitator or mediator. However, not all triangles are constructive, and the addition of a third person can be just as destructive.

Karpman posited that each point on the triangle represents a common and ineffective response to conflict, one more likely to prolong disharmony than to end it. Many people report playing out the drama in the varying roles inside their own minds as well as externally in dialogue with others. The Drama Triangle has been used intensively in psychotherapy, but now is an addition to the psychological underpinnings of many coach training programmes.

All the World’s a Stage: The Players

The Drama Triangle has three roles which rotate as we communicate (or transact). During an interaction people (‘players’) can move positions on the triangle incredibly quickly. Watch any TV soap opera where conflict is happening (lots of shouting and not much listening) and you will see this in action. In actual fact without the Drama Triangle most soap shows would be very dull! And just like TV, there are ‘players’ playing a role.

When looking at definitions from a variety of authors it’s easy to see why.

The three roles are called:

Each role has specific behaviours, beliefs, and perceptions associated with it.

These are not roles that stay fixed, although most of us have a propensity to default to a favourite position when under some form of stress. We are all looking for some sort of ‘pay-off” that can literally feel like a release of some sort as we try to defuse our own tension building up inside.

So, we can be all three roles at times, but not at the same time.

Here is a brief overview of each role:

Often this is a form of getting our retaliation in first, because in this role we actually feel quite inadequate underneath, although this allows us to try to wrestle back control of an interaction with order and rigidity. Control and power are crucial in Persecutor mode. The giveaway is that our language is often peppered with ‘musts’ and ‘should’s’ directed at others sometimes in a loud bullying style. In Chapter 2, you will see this in action in the case study with Hazel.

So, what’s the pay-off or benefit to us in acting this way? In Persecutor mode, we can abuse our power and get to be righteously indignant and convinced that we are in the right, hence justifying our release of pent-up emotions.

In Rescuer role, we are always working hard to ‘help’ other people, often through guilt (even when they haven’t asked) and constantly applying short-term repairs to another’s problems (usually a Victim), while neglecting our own needs. This means we end up harried, tired and suffering from some form of physical complaint, e.g., muscular pain brought on by stress, insomnia, poor eating patterns etc.

Even though we are busy running around after everyone else we can feel quite angry underneath with a strong feeling of being undervalued. This does not come out explicitly because avoiding drama or conflict is the name of this particular game with a Rescuer. As Rescuer, our style may be loud and expansive (“look at all this that I’m doing for you”) or it can be quiet martyr (“never mind me I’m used to this amount of work”). The pay-off here is that we get to look strong, capable and be one up on our Victim as we support them in staying dependent and helpless… which means we can continue to help them and maintain a sense of purpose for ourselves.

As Victims we can deny responsibility for negative circumstances and deny possession of any power to change them.

As Victims we can also do less than 50 per cent of the ‘work’ needed to sort out a difficult situation by pretending impotence and incompetence.

We often won’t take a stand or stand up for ourselves assertively, have a tendency to act ‘super-sensitive’ and require kid glove treatment. People around a Victim can feel like they are walking on eggshells waiting for the next drama to kick off.

*Martyr Victims are a special class - Barry and Jane Weinhold (2016) describe them as emotional vampires, drama queens (men and women) and being prone to escalate into hysteria. They may act out toxic theatrical vignettes (just like soap opera) and be hooked on the high drama “They are convinced nothing will help improve their situation - they are eloquent committed victims.”

Summarising the Three Roles of the Drama Triangle

The Bad Guy: Needs to invent excuses to justify, or be right, dump repressed feelings onto others.

And here is the most surprising thing about the Drama Triangle…

The Weinholds say that when we are a Victim, we can get what we want (respect, status, love, attention, empathy, care, hugs) without having to directly ask for it. Most of us have not been raised by our parents to ask directly for what we want. Often if we did ask, as children, for something tangible then we were criticised for being selfish and that other people’s needs were more important than ours, e.g. “Don’t bother your Dad right now… you know how busy he is.”

In most cases, our needs are for things that are difficult to ask for once we become adults. Even with people we are closest to it can be hard to ask for love or attention, so we disguise it as something else, e.g. asking for tasks to be done instead, such as putting out the bins, “if you loved me you would help me around the house; I’m doing all this by myself”, helping with internet banking, putting on a woeful face, etc. 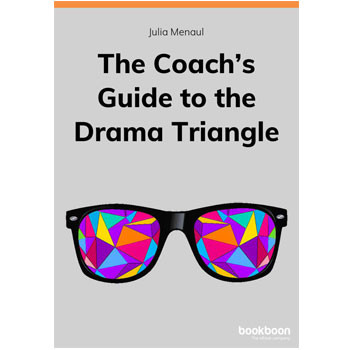